Once again the business pages on all major news outlets are pretty much dominated by the developing story of coronavirus – every sector has some kind of tale to tell. So here is the roundup from today.

RBS said it will allow mortgage holidays for people who are forced to stay home from work and risk missing mortgage repayments as a result. The holiday could be provided for a period of up to three months, and will include other lending services such as loans. RBS owns Natwest and the Ulster Bank brands too, and said savers could also get their money out early with no charges – it recognises that many people will want to rely on their own savings pots to get through any difficult circumstances that arise due to the spread of the disease.

Other types of help the bank is laying on include temporary increases to credit card limits, refunds on cash advance fees for credit cards, and an increase of up to £500 to the cash withdrawal limit. A spokesman for RBS told the BBC: “ “We are monitoring the potential impact of Coronavirus across all our customers to ensure we can support them appropriately through any period of disruption. We also have operational resilience plans in place that reflect guidance from Public Health Authorities to ensure we can continue to serve our customers.”

It looks like a similar scheme is being implemented nationwide in Italy, where the virus situation is much worse right now than in the UK. Mortgage payments are reportedly to be suspended across the whole country, which is the worst affected after China with 463 confirmed deaths so far.

Virgin Atlantic is flying planes that are almost empty due to the fall in the number of bookings which is absolutely battering the airline industry. It turns out that under EU rules, carriers are subject to a ‘use it or lose it’ policy where their slots with major international airports are concerned. As a result, says Virgin, it has to operate the flights in order to guarantee that it can hold onto the take-off and landing slots that in better weather it would be using for full planes.

The UK’s transport secretary, Grant Shapps, said he has written to the European Commission, which has the power to table changes to the rules, to ask that they provide some special dispensation. On Twitter, he said: “Aviation demand is reduced due to COVID-19, but airlines are being forced to fly some ‘ghost flights’ to avoid losing their slots – bad news for the environment, airlines & passengers. I’ve written to the regulator to request urgent reconsideration of 80% slot utilisation rule.”

Aviation demand is reduced due to COVID-19, but airlines are being forced to fly some ‘ghost flights’ to avoid losing their slots – bad news for the environment, airlines & passengers. I’ve written to the regulator to request urgent reconsideration of 80% slot utilisation rule. 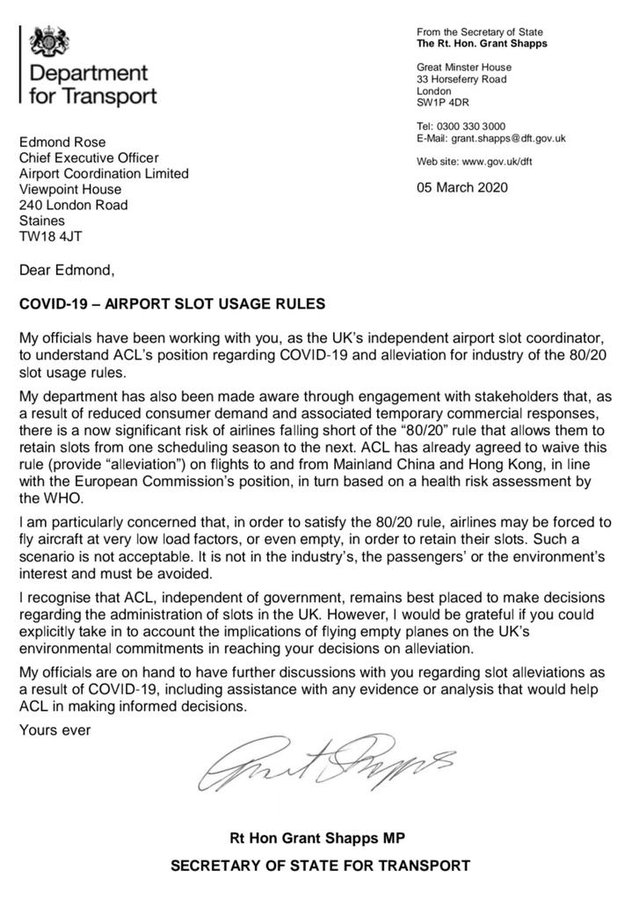 It looks like stock markets have calmed a little, after yesterday’s absolutely precipitous sell off in all the major global exchanges. Shares throughout Europe suffered their biggest collective drop since the financial crisis kicked off in 2008. The FTSE 100, which leans heavily into international businesses and also fossil fuels, sank 7.7% yesterday, wiping tens of billions of pounds of the value of its members. The selloff was prompted by the spectre of an oil price war between Saudi Arabia and Russia.

Why? Because when the oil price falls (which it has due to anticipated recession and also reduced aviation fuel demand), it is a common practice in the industry to restrict supply, thus re-tilting the balance of supply and demand and driving the price back up. The Organization of Petroleum Exporting Countries (known as OPEC), wants to restrict supply in order to do just this, but Russia, which is not a part of the consortium, doesn’t want to. Rather worryingly, it has the potential to lead to geopolitical tensions, since the OPEC members are Iran, Saudi Arabia, Indonesia, Venezuela, Iraq, and Libya, among others.

The fact that the market has stabilised today could be down to one of two things. First, that the damage investors expect to be wrought by the oil competition has now been priced in, or second, that they feel the tensions over the issue have stabilised to some extent. You would have to be better connected than me to know what OPEC is thinking though.

Anyway, the FTSE 100 has risen more than 3% today, thereby recovering just under half of yesterday’s losses, and the oil price has also rallied, climbing 8% despite falling by almost a third yesterday.

The market volatility is pretty unusual even when compared with other periods of uncertainty, like the war in Iraq, and the Dotcom bubble bursting.

That’s all for today.

The way forward from the moratorium

Reflecting on 2020 as a restaurant owner

What lies ahead for independent restaurants?

The way forward from the moratorium

Reflecting on 2020 as a restaurant owner

What lies ahead for independent restaurants?

Did the EOTHO scheme actually help out?

Three steps to getting your business ready for Natasha’s Law

Keep your staff motivated and inspired through lockdown 2.0

How Covid-19 has changed the progression of FoodTech